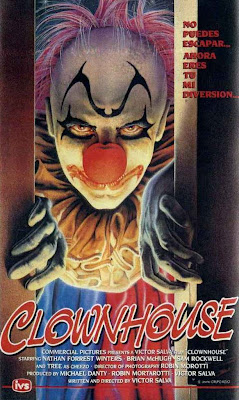 Four things about CLOWNHOUSE: 1) there's no real actual clowns - with clown superpowers - it's just three escaped mental patients dressed as clowns 2) there's hardly any action until the very end 3) this movie is gay in a uncomfortable NAMBLA-style way. The three main characters, all young boys, appear topless a lot, bare assed or in their underwear or sitting in a bathtub while his two brothers watch(!!!!!!). They also talk about pubic hair and peeing the bed and other creepy stuff in uncomfortable child molester-ery ways. Plus, when you think about it, the story is about three adult men (chickenhawks) stalking three young underage boys (chickens). 4) It's the first movie of Sam Rockwell, so that's kinda interesting.

Three young boys, who are left alone in a large, secluded house are stalked and hunted by three escaped mental patients who dress like clowns. Interesting idea, but this movie is very, very slow. Honestly, I fucking hated it. If I was a little kid it might scare me, but as an adult you can see all of the scares coming a mile away (little boy reaching for his brothers hand while his head is looking the other way; camera panning away from the "dead body" while boy uses phone; camera showing large area behind boy while he's messing with fuse box; etc.). Another thing that upset me was it took damn near 30 minutes for the killers to even get into the clown make-up! That's way too long for a set up...the entire movie is only 81 minutes!

Bottom line: if you like watching young boys walk around half-naked and then later on stalked and wrestling around with grown men then check out CLOWNHOUSE. If you want to watch a real horror movie about clowns then...well, uh, you're probably out of luck. I guess you can always read IT again. Or for full-blown clown weirdness watch KILLER CLOWNS FROM OUTER SPACE.
Posted by Dymon Enlow

Email ThisBlogThis!Share to TwitterShare to FacebookShare to Pinterest
Labels: gay, horror, Sam Rockwell
Newer Post Older Post Home
All reviews are a work in progress. All opinions are mine. All mistakes are mine as well.
[Update 03/01/2020: Current victim of severe mental and emotional abuse. Too depressed to write. I might occasionally edit some older stuff, but there will not be any new reviews until I feel better.]
Dymon Enlow
Austin, TX